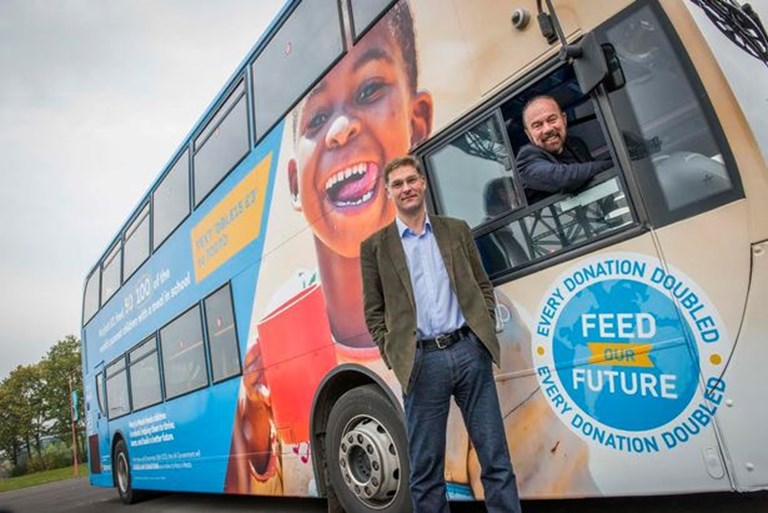 Above Sir Brian Souter can be seen, alongside CEO and founder of Mary Meals, Magnus McFarlane Barrow, in the drivers seat of a double decker bus specially decorated with Feed Our Future livery to publicise the campaign all over Tayside and Angus.

Sir Brian Souter has rallied his Stagecoach transport group to back a charity campaign that helps feed poverty stricken children in Africa.

Mary's Meals is a Scottish charity that provides impoverished children in Malawi and Zambia with a daily meal in school, attracting children into education. In May, the charity reached a milestone, feeding one million children every school day.

As well as pledging to match all customer and employee donations to the campaign, Sir Brian has buses on more than 150 Stagecoach routes carrying a "text to donate" code as well as Mary's Meals posters and stickers urging the public to donate to the campaign.

The "text-to-donate" campaign will raise funds to allow the charity to continue its vital work in Africa. The campaign is also being supported by the UK Government which has agreed to double all donations made until the 28th of December.

Speaking about the campaign, Sir Brian said: "Providing a child with one meal every school day can make a huge difference, helping lift them out of poverty later in life. We are delighted to support the great work of Mary's Meals"